“Our roots go back to the year 1904-05 when Mabel Weaver, a consecrated servant of the Lord,  built Peace Chapel at the corner of Springfield and Armory Streets in Springfield. It was an interdenominational work. Rev. A. B. Simpson, founder of the Christian and Missionary Alliance, dedicated it to the Lord’s work. This early heritage destined the influence of the church around the world.

In the year 1919 Bethany Fellowship Chapel, as it was then named, became affiliated with the New England District of the Assemblies of God. There was a succession of preachers who ministered in the “Chapel” in those early years.

In the year 1924, the church became incorporated under the name of Bethany Pentecostal

Church. The ministry of the church continued to bear a great influence for God.      In 1954 the church changed its name to Bethany Assembly of God to      conform to the denominational name.

Under the blessing of God, the leadership of our Head, Jesus Christ, and the enabling of the Holy Spirit, the church has continued to enjoy spiritual and physical growth. In the Springfield location the church entered into at least three major

building programs during which the seating capacity was enlarged from 120 to 560.

Continued growth required a second building project on our present site. The facility focuses on the needs of our youth and children providing them with an auditorium, nursery, and classrooms. Ground was broken on March 16, 1997, and the addition was dedicated on Easter Sunday, April 12, 1998 for the furtherance of the Kingdom.”

The successive ministries of the following pastors and, should Jesus tarry, the future pastors, unite to raise up a mighty standard in these last days: 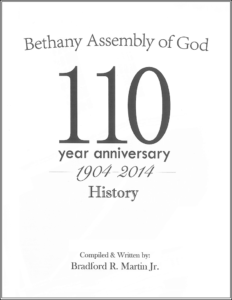