Assemblies of God World Missions represents a growing family of more than 4,113 people –-2,098 appointed missionaries, 615 missionary associates and 1,400 missionary children – scattered throughout 200 countries and territories. These dedicated men and women, along with their children, are taking the gospel to cities, urban areas and remote villages, telling a lost world that Christ loves them and came to redeem them from their sins. Together, they work with more than 310,000 national pastors in six geographical regions – Africa, Asia Pacific, Eurasia, Europe, Latin America/Caribbean and Northern Asia. A Word that accurately describes AG World Missions today is “unprecedented.”

In Acts 1:8, Jesus told the apostles, “…and you will be my witnesses in Jerusalem, and in all Judea and Samaria, and to the ends of the Earth.” It is important that we stress the urgency of missions in America. Our country has an estimated 105 million lost souls. If we sit by and do nothing, there can be no doubt God will hold us accountable for letting these people die without Christ when it would have been so simple to share the gospel with them. As congregations across America see the statistics of suicides, drug use and false religions, and watch interviews where men and women of all ages and ethnicities deny the existence of our sovereign God, The monumental task of reaching the lost in America is all too apparent as we see the statistics of…and hear people of all ages and ethnicities deny the existence of our Lord, Jesus Christ. 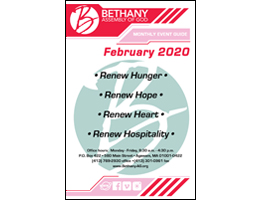 What Love Is by Kelly Minter The Letters of 1, 2 & 3 John were written to encourage followers of Jesus to remain faithful to the truth. During this 7-session study, we’ll be challenged to look at contrasting themes such as walking…
Feb
28
Fri
8:00 am Revo Winter Retreat
Revo Winter Retreat
Feb 28 @ 8:00 am – Mar 1 @ 4:00 pm

The Revolution Youth’s Winter Retreat will be February 28 – March 1.  Coat is $135 per person, and signup in the bookstore.  Deadline is February 19, 2020.  Permissions slips are required.
Feb
29
Sat
11:00 am Ladies Prayer Walk @ Bethany Assembly of God
Ladies Prayer Walk @ Bethany Assembly of God
Feb 29 @ 11:00 am – 12:00 pm
The Women’s Ministries will be hosting a Prayer Walk on Saturday, February 29 from 11am – noon.  There will be prayer stations set up in the sanctuary with different themes to pray over.  The Word of God encourages us in…